On your marks, get set… glow! Head to this action-packed new Spanish resort and the whole family will be fizzing with vitality

We’ve always dragged our children across Europe on holiday, staying in a rented house and stopping off at a supermarket en route.

In the months before departure, my husband Guy would painstakingly plan the Eurostar journey, the overnight stopovers, and even the toll payments. For my part, I would simply look forward to the freedom of waking up with the day stretching ahead, ours to do with as we like.

But now, after much deliberation, we are taking our two children — Herbie, 15, and Iris, eight — on a new adventure: an all-inclusive Neilson activity holiday. Perhaps it’s the mention of the ‘8am 5km run’, but I have never dreaded a holiday more. 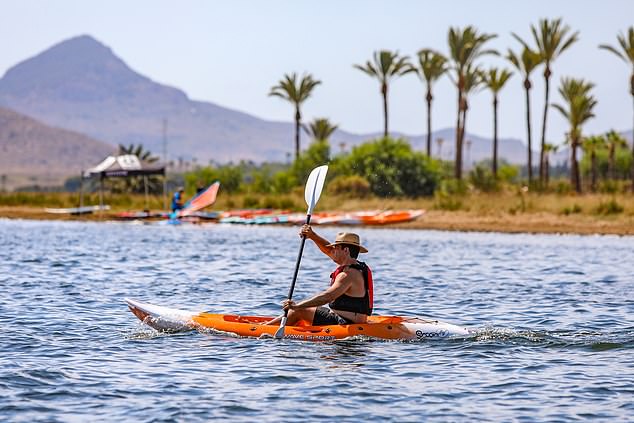 Non-stop fun: Mar Menor Beachclub in Spain, where every second can be crammed with sports from volleyball to kayaking

Mar Menor Beachclub in Los Urrutias, southern Spain — a 40-minute transfer from Murcia airport — is the latest super-luxe addition to the Neilson empire.

Alongside rival Mark Warner, Neilson has been providing all-inclusive active holidays for more than 40 years. Both companies seem to have weathered the package-holiday dip that caught Thomas Cook by surprise last year, but the central premise is the same — all holidaymakers are expected to do is turn up.

That doesn’t mean you just lie around all week. Far from it. Every second can be crammed with sports — from volleyball and mountain biking to boxercise classes and catamaran joy-rides. This is not a holiday for fat-cat lazing.

When we mention it to friends who have already been, they speak about it with the zeal of the newly converted. ‘Sign up for as much as possible, as quickly as possible,’ they would say conspiratorially.

All the kids’ clubs, and almost all of the fitness activities, are included in the price, as is the daily buffet-style breakfast and lunch, and four evening meals a week. (And, no, you don’t have to share tables — although by the end of the week the teens invariably do.)

Spa treatments and any drinks from the rooftop and beach bars are added to your bill, which, even when you know this, will still give you a nasty shock at check-out.

Our first glimpse of the resort is of the gleaming white facade, behind which a horseshoe of identical-looking rooms curves round three pools with loungers and cabanas.

Mar Menor, in the Iberian Peninsula, is a saltwater lagoon with a unique, protected ecosystem. It isn’t the most scenic of places — it looks straight across to the high-rises of La Manga — but Neilson knows its stuff, and it is the perfect place for water sports.

First, we are given an activity planner from which to select free daily group lessons in tennis (fortunately streamed so that barely-hit-the-ball players like myself don’t have to be humiliated by Wimbledon wannabes like my husband), yoga, windsurfing and Zumba. We add a few paid-for extras: kite surfing, a scuba diving trip and a massage.

We had pre-booked the children into kids’ clubs, but even before Iris’s ‘Sharksters’ session begins, she works herself into a frenzy, crying after a dip in the pool as she hasn’t made any friends in the first five minutes. Her near hysteria culminates in a gash on her foot. It is at that moment, blood gushing between her toes, that the real Neilson magic happens.

Within seconds, first aider Summer — by name and nature — turns up. Like a knight in smiling armour, she hoses down Iris’s foot and dresses it. By the second day, Iris is happily hobbling off to her club, assiduously ignoring us when we wave to her in the pool. 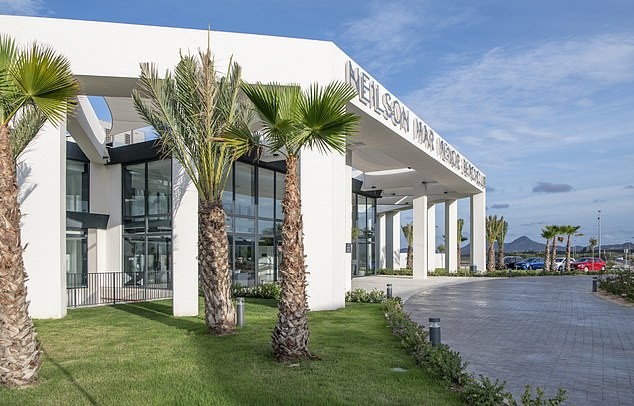 Mar Menor Beachclub, pictured, is a 40-minute transfer from Murcia airport. It is the latest super-luxe addition to the Neilson empire

As the week unfolds, it becomes even clearer as to why Neilson has an evangelical following. The staff are extraordinary. Many of them, I learn, went on holiday with the firm when they were children. They go on a ‘zero-to-hero’ training course, and it shows. The trickier the guest, the nicer they become. And there can be no trickier guests than the 30-odd recalcitrant teenagers who are trying their best to mingle.

I take myself to the ‘teen talk’ at the beach bar. There is only one other mum there — Liz, a sailing whiz with two teenage girls, both Neilson devotees. ‘It’s difficult to persuade them to do any other holiday now,’ Liz admits.

Instead of the pep talk I’d expected, we get an illuminating insight into what to expect from our not-so-little darlings in the coming week. ‘They will drink. Usually on the beach — so if you can’t find them at 1am, that’s where they’ll be. The best thing you can do is give them a curfew.’

As it turns out, they are relatively well-behaved, gathering during the day at the poolside area, complete with bean bags. By night, they have the time of their lives in the exercise area, their mobiles moving around in the dark like flirtatious glow worms.

On the plane home, my son is pinging emojis to a hastily set-up WhatsApp group, while only seats away from his new friends.

‘Best holiday ever,’ says Herbie. My husband and Iris agree. We have all been well and truly converted.

Celia and her family travelled with Neilson holidays to Mar Menor Beachclub, from £499pp based on two adults staying for seven nights, including return flights from London Stansted and transfers (neilson.co.uk). The cost for a family of four (two adults and two children aged two to 14) sharing an interconnecting room is from £1,535.