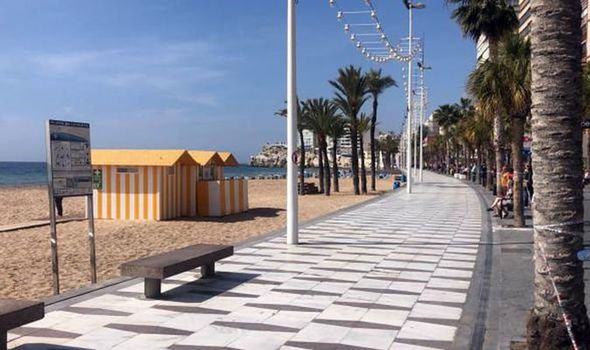 The Costa Blanca resort is following the examples of thousands of local councils throughout the mainland of Spain, the Canary Islands and the Balearics following Spain’s declaration of a State of Emergency. The police and council staff have been out and about over the last few days putting up barriers and no entry signs to the beach fronts, preventing thousands of tourists from going on the sand or into the sea.

Benidorm had originally vetoed swimming but has now extended the ban to going on the entire beach areas.

The Mayor of Benidorm, Toni Pérez says ordering the beach closure is one of the hardest decisions a mayor could take but they had no choice given the seriousness of the situation.

“We are sure we have everyone’s understanding from those of us who are currently in Benidorm, ” he said.

In the south of Tenerife, the popular beaches in Playa de las Americas and Los Cristianos are deserted this morning after the local council put up barriers to comply with the new coronavirus restrictions.

Meanwhile, a woman has become the first person in the Balearics and possibly in Spain to be arrested for flouting the new State of Emergency ruling after sunbathing on the grass near the seafront! 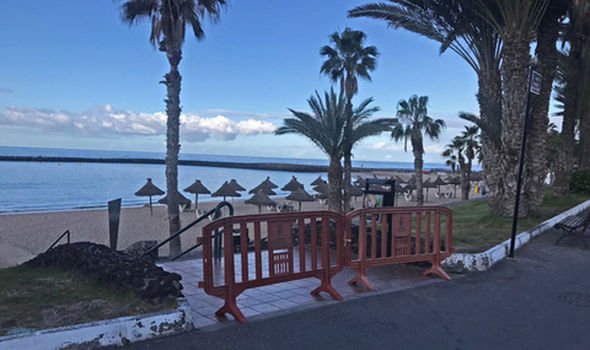 She was taken into police custody following complaints from local residents in Palma, the capital of Majorca which, like the Spanish mainland, is under strict curfew conditions.

The Spanish Government has BANNED the use of all outdoor spaces and parks, as well as many beaches, as part of the containment measures to stop the flow of coronavirus.

The furious woman was arrested by Spanish police and put into a police van after she refused to pack up and go home peacefully. Local people and residents are only supposed to be on the streets with good reason, including to visit a supermarket, chemist or bank, to look after an elderly resident or to go or return from work.

The woman now faces a fine for civil disobedience and not complying with the State of Emergency.

Police said she and friends were sunbathing on the lawns near the seafront. When officers arrived, they were lying on towels and having a drink.

“The officers spoke to those present and communicated verbally and informatively that they should leave the area and remain at home,” says island newspaper Ultimahora.es. “A woman, far from complying with the instructions of the authorities, confronted them and told them that she wanted to get a tan.

“After several verbal attacks on the police officers and because of her attitude, she was asked to identify herself but refused.”

Civilians who refuse to comply with the orders of the State Security Corps and Forces in relation to the measures adopted in the framework of the State of Emergency may incur a crime of disobedience or resistance to authority.

“Fines of between 600 and 30,000 euros can be imposed and a public address system is being used to warn people in Spanish, Catalan, English and German.