A group of Britons stranded in Peru will miss rescue flights put on by the Foreign Office after two travellers at the hostel they are staying in tested positive for coronavirus.

Around 140 guests in the Pariwana hostel in Cusco, including nine British citizens and one Irish one, have been told they could be quarantined for up to three months and will now be confined to their rooms for 23 hours a day.

Failure to comply could result in imprisonment, the Peruvian authorities have told them.

What are coronavirus symptoms and should I go to a doctor?

It is caused by a member of the coronavirus family that has never been encountered before. Like other coronaviruses, it has come from animals.

The virus can cause pneumonia-like symptoms. Those who have fallen ill are reported to suffer coughs, fever and breathing difficulties.

In the UK, the National Heath Service has defined the symptoms as:

Medical advice varies around the world – with many countries imposing travel bans and lockdowns to try and prevent the spread of the virus. In many place people are being told to stay at home rather than visit a doctor of hospital in person. Check with your local authorities.

China’s national health commission confirmed human-to-human transmission in January. As of 26 March, more than 474,000 people have been infected in more than 150 countries, according to the Johns Hopkins University Center for Systems Science and Engineering.

There have been over 21,300 deaths globally. Just over 3,200 of those deaths have occurred in mainland China. Italy has been worst affected, with over 7,500 fatalities. Many of those who have died had underlying health conditions, which the coronavirus complicated.

More than 115,000 people are recorded as having recovered from the coronavirus.

“The news that we could be trapped here for three months is devastating,” said Alex Foulkes, 31, a freelance film-maker from Wrexham who is trapped in the hostel.

“It feels like being in prison. We literally just have beds in our rooms and the bathroom is shared by dozens of travellers. I’m not sure how we’ll cope with being confined to our rooms for the next three months for 23 hours a day.”

Footage shot by Foulkes shows guests being told the ministry of health has imposed a quarantine “which can last from one month to three months”.

The virus outbreak has led to growing anxiety among the estimated 700 Britons remaining in Peru after the first British Airways repatriation flight left Lima on Wednesday.

Organisers say people are getting increasingly worried that the Foreign Office’s repatriation efforts do not have control of the situation.

“I wasn’t panicked up to now, but I am now,” said Ellie Harper, 32, who is stuck five hours from Lima. “We have had no information about when the next flights are coming, we have heard rumours that they could be next week but this shows the longer this goes on the greater the chances of us being hit by coronavirus and being forced into quarantine for three months.”

There have also been reports of poor communication.

One couple told the WhatsApp group of marooned Britons on Wednesday night: “We had a call just now from the British embassy saying we should have been on today’s flight but they never emailed us to say that, and they emailed us yesterday to say we weren’t on the flight and they are now saying it’s too late.” 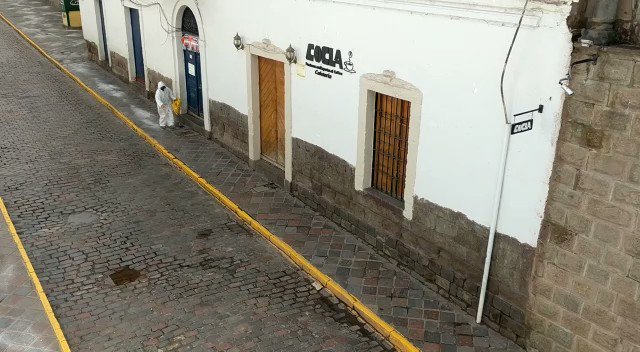 Another couple in Cusco told how they were selected for the first rescue flight but made it clear to the Foreign Office they were 22 hours away from Lima. When they stood outside their hotel at the allocated time for the pick-up bus, none came.

“They then went to the airport in Cusco and there were just two queues – one of Brazilians and one of Americans all holding certificates for travel and their passports and no sign of any British representatives,” Harper said.

The twitter group #uk&irishstuckinperu tweeted to the British ambassador to Peru, Kate Harrisson: “This could have been avoided if you had taken the correct action.”

Germany appears to be leading the way on repatriation, with British people stranded in India and Thailand remarking how it has desks at the airports and is actively trying to register its stranded citizens.

Chris Linford, 56, from Hayfield in Derbyshire, said citizens of all nationalities were congregating outside the German embassy in Delhi as it seemed to offer the best hope of leaving India.

The cafe owner said: “Every other country has left. They’ve all been repatriated for free: Russia, Canada, Germans, Bulgarians, Italians,” he said. “All these foreign nationals are meeting at the German embassy. They [the embassy] are organising all the buses to the airport. It’s all been going through the German embassy.”

Another British national got a seat on one of seven coaches charted by the German government to take stranded Europeans from Rishikesh to Delhi five hours away. The woman, who did not want to give her name, stood outside the Germany embassy on Wednesday pleading for help. She said: “The British still say call the airline but they [the airline] say call the embassy. Our government is an embarrassment.”

The German foreign minister, Heiko Maas, has said the main focus must now be to provide quick and unbureaucratic help.

By contrast, the UK has repatriated just over 1,000 citizens.

The foreign secretary, Dominic Raab, told MPs on Monday citizens had been repatriated from 26 countries “as far flung as from Wuhan [China] over to Cuba”.

Claire Waterton, the mother of a young Briton stranded in Ecuador, wrote to Raab this week to complain that the Foreign Office’s advice to keep checking airline websites was “meaningless”.

“This week all German tourists in Ecuador were asked to register their exact locations in the country. Transport was laid on to pick them up and to deliver them to the airport,” she said, adding that her daughter and friend were “still stuck in the very hostel that German citizens have vacated, confused by your excuses and suggestions”.