Social distancing on aircraft would lead to airfares rising to between 43 and 54 per cent, just for carriers to break even, the International Air Transport Association (IATA) has warned.

It explains that social distancing measures on aircraft would fundamentally shift the economics of aviation by slashing the maximum load factor to 62 per cent, well below the average industry ‘breakeven load factor’ of 77 per cent.

With fewer seats to sell, unit costs would rise sharply. 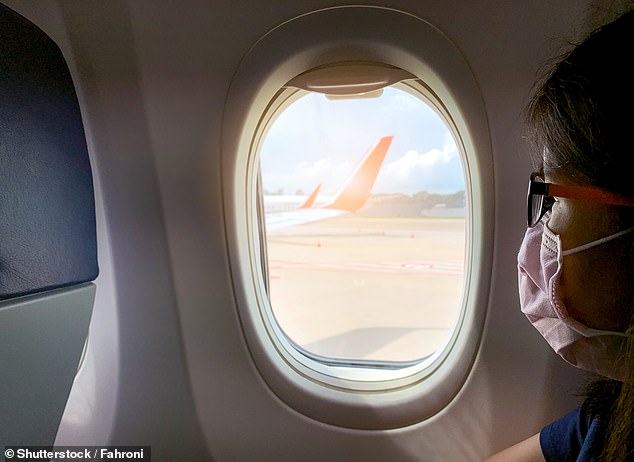 Social distancing on aircraft would lead to airfares rising to between 43 and 54 per cent, just for carriers to break even, the International Air Transport Association (IATA) has warned 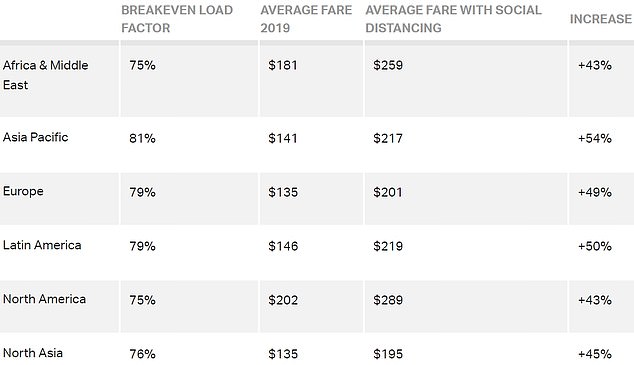 The IATA said it does not support social distancing measures that would leave ‘middle seats’ empty.

Instead, it supports ‘the wearing of face coverings for passengers and masks for crew while onboard aircraft as a critical part of a layered approach to biosecurity to be implemented temporarily when people return to travelling by air’.

In a statement, the IATA said additional measures could include temperature screening of passengers, airport workers and travellers; boarding and deplaning processes that reduce contact with other passengers or crew; limiting movement within the cabin during flight; more frequent and deeper cabin cleaning, and simplified catering procedures that lower crew movement and interaction with passengers.

It added: ‘When proven and available at scale, testing for Covid-19 or immunity passports could also be included as temporary biosecurity measures.’

The risk of virus transmission onboard aircraft is low even without special measures, the IATA explained.

It pointed to evidence such as contact tracing for a flight in January from China to Canada with a symptomatic Covid-19 passenger among the 350 in the cabin revealing no onboard transmission.

It added: ‘Contact tracing for a flight between China and the US with 12 symptomatic Covid-19 passengers [also] revealed no onboard transmission.

‘An IATA informal survey of 18 major airlines identified, during January-March 2020, just three episodes of suspected in-flight transmission of Covid-19, all from passengers to crew. A further four episodes were reports of apparent transmission from pilot to pilot, which could have been in-flight or before/after (including layover). There were no instances of suspected passenger-to-passenger transmission.’ 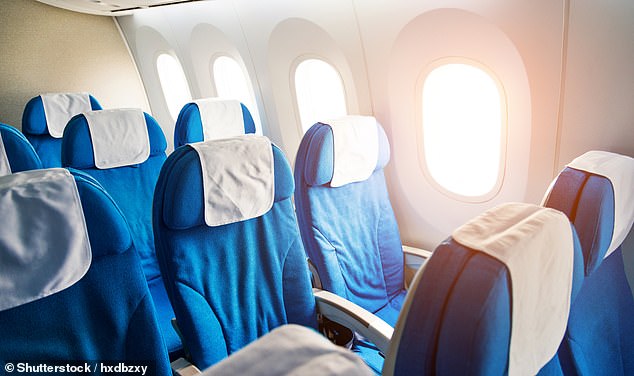 The risk of virus transmission onboard aircraft is low even without special measures, the IATA explained

There are several plausible reasons why Covid-19, which is spread primarily by respiratory droplets, has not resulted in more onboard transmission, and is different from other modes of public transport, the IATA said.

One is that passengers face forward with limited face-to-face interactions and another is that seats provide a barrier to transmission forward to aft in the cabin.

The IATA also emphasised that air flow from ceiling to floor further reduces the potential for transmission, along with air flow rates, which ‘are high and not conducive to droplet spread in the same way as in other indoor environments’. 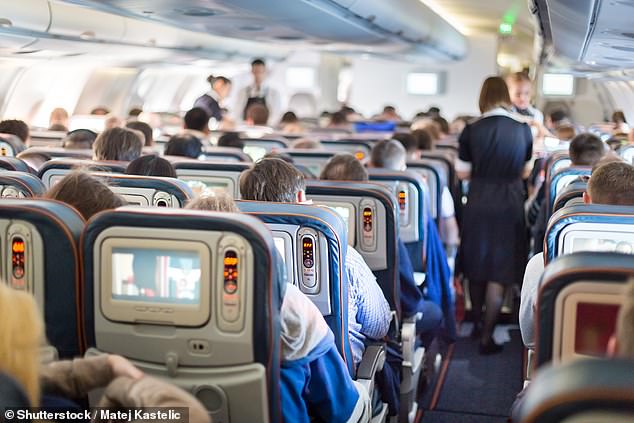 The risk of virus transmission onboard aircraft is low even without special measures, the IATA explained

Alexandre de Juniac, IATA’s Director General and CEO, said: ‘The safety of passengers and crew is paramount. The aviation industry is working with governments to re-start flying when this can be done safely. Evidence suggests that the risk of transmission onboard aircraft is low.

‘And we will take measures – such as the wearing of face coverings by passengers and masks by crew – to add extra layers of protection. We must arrive at a solution that gives passengers the confidence to fly and keeps the cost of flying affordable. One without the other will have no lasting benefit.’

He added: ‘The cabin environment naturally makes transmission of viruses difficult for a variety of reasons. That helps explain why we have seen little evidence of onboard transmission.

‘In the immediate term, our aim is to make the cabin environment even safer with effective measures so that passengers and crew can return to travel with confidence. Screening, face coverings and masks are among the many layers of measures that we are recommending. Leaving the middle seat empty, however, is not.’

Recent and upcoming hotel openings in New Orleans include the return of one brand to the city as well as two brands making their Big Easy debuts.

• This month, Kimpton Hotels and Restaurants returned to New Orleans after a 15-year absence with the opening of the Kimpton Hotel Fontenot. The 202-room property, at Poydras and Tchoupitoulas streets in the Warehouse District, comprises a reconfiguration of several structures, including the former Staybridge Suites New Orleans.

Interiors “are inspired by the city’s iconic Southern hospitality and famed jazz musicians as well as the building’s original architectural details,” according to a Kimpton statement, with nods to New Orleans heritage such as a 7-foot trombone installation in the lobby.

Guestrooms have “a clean and modern design aesthetic with soft accents of French blue and pink,” according to Kimpton, and feature honor bars and all-day room service. Guests looking to stay active can rent bikes or head to the 24-hour fitness center.

The Peacock Room serves what Kimpton describes as “a contemporary selection of spirits and craft cocktails and a food menu featuring refined shareable interpretations of regional classics,” while Gospel Coffee and Boozy Treats offers a variety of coffee beverages and frozen drinks as well as breakfast tacos and house-made pastries.

• Set to open later this year is a 341-room Four Seasons on the former site of the city’s World Trade Center building. It will be the first property in New Orleans to bear the Four Seasons brand.

The Four Seasons Hotel and Private Residences New Orleans will be housed within the lower floors of a 34-story, mixed-use development, with 92 condominiums on the upper floors, four food-and-drink outlets, a rooftop pool, a spa and 22,500 square feet of meetings space.

“New Orleans has been a priority market for us for many years, and we have been waiting for the right opportunity to make our debut in this dynamic city,” John Davison, president and CEO of Four Seasons Hotels and Resorts, said in a statement.

• The Virgin Hotels brand is set for its New Orleans debut in late 2021 in the city’s Warehouse District.

“New Orleans is an incredibly special city and one Virgin Hotels has had an eye on from the beginning,” Raul Leal, CEO of Virgin Hotels, said in a statement. “The history, the food, the music, the spirit — they all work together to make it a one-of-a-kind destination for both business and leisure travelers.”

The 225-room newbuild on Baronne Street will feature a rooftop pool and lounge, gym and dedicated meetings and event spaces.

Air traffic controllers and other workers at 10 airports and control facilities across the country have tested positive for the coronavirus, according to the Federal Aviation Administration.

Coronavirus cases at Chicago Midway and Las Vegas’ McCarran airports last week led control towers there to be closed and disinfected, forcing the delay or cancellation of hundreds of flights.

The FAA declined to say how many air traffic controllers and other personnel have tested positive for COVID-19, the disease caused by the coronavirus. But the outbreak has caused major disruptions to the nation’s airspace, and it has the potential to cause more.

In the New York region alone, FAA personnel have tested positive for COVID-19 at four facilities, including LaGuardia and JFK International airports. New York has the highest number of coronavirus cases in the country, and public health experts predict that other regions of the country could see a rapid increase in the coming weeks.

The union that represents air traffic controllers has pleaded with state and federal officials for more widespread testing, has asked for clearer guidance on cleaning and disinfecting control tower workspaces and has even postponed its May convention in Houston.

The National Air Traffic Controllers Association union wrote its members on Sunday that “lower-traffic facilities” may need to close to ensure enough personnel are available to manage national airspace.

“It is possible, but there is not yet enough data to predict one way or another,” said John Cox, an aviation safety analyst and a retired commercial airline pilot who writes a regular Ask The Captain column for USA TODAY.

An example of a lower-traffic airport would be the one in Grand Rapids, Michigan, Cox said, whereas La Guardia would be considered high-traffic.

Cox said the FAA is not likely to run out of personnel to manage U.S. airspace.

Cox said the FAA already does that at night, when there are fewer flights. He said the FAA worked around the problems in Chicago and Las Vegas.

Both airports were still able to clear a reduced number of flights for takeoff and landing. Already dealing with a steep drop in demand, many carriers simply canceled flights.

“They kind of put a makeshift system together that worked,” Cox said.

Once quarantined personnel recover or complete their 14-day isolation, he said, they’ll be able to go back to work.

“Once the recovered people start to come back,” Cox said, “hopefully that gives us enough to keep things running.”

Last week, three FAA technicians tested positive for the coronavirus at Chicago Midway International Airport. The tower was closed for at least two days to be disinfected.

Other locations where controllers or workers have tested positive include the air route traffic control centers in New York and Indianapolis, and smaller airports in Peoria, Illinois; Wilmington, Delaware; and Farmingdale, New York.

“Like much of the country, the Federal Aviation Administration is experiencing an increase in COVID-19 cases at air traffic facilities and other offices across the nation,” the agency said in a statement Saturday. “Each disruption has a distinct impact on the air traffic system. This is frustrating and inconvenient, but is necessary in the interest of safety.”

When an itinerary change canceled a mid-cruise wedding on land in Jamaica, officers and crew on Carnival Cruise Line’s Carnival Freedom pulled off an impressive impromptu ceremony for the couple on the ship.

San Antonio couple Liza Garcia and Theodore Herrera planned to marry in Jamaica, but island officials were working through their coronavirus policies.

Without assurances that the ship would be able to dock, Carnival revised the itinerary to Key West instead so guests would still get a three-port vacation. 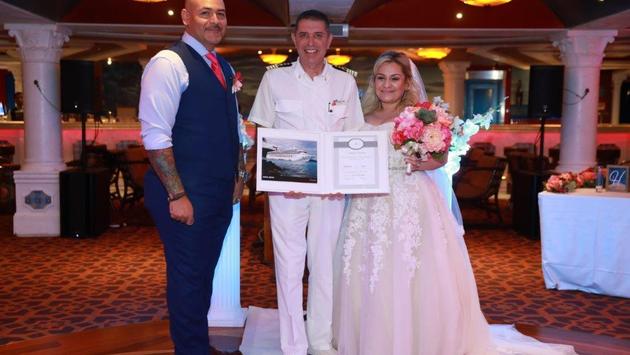 “All of us on board were heartbroken when we learned that Liza and Theodore weren’t able to go ashore for their wedding. We got together as a team and promised to deliver the dream wedding that they deserve,” said Nikhil Khanna, hotel director on the Carnival Freedom. “At Carnival, we want to make sure our guests are provided the vacation of a lifetime and when these types of unforeseen circumstances come up, we take great pride in creating these surprises and delightful moments that our guests will remember forever.”

The crew surprised the couple with an impromptu wedding for them and their guests sailing with them, with Captain Francesco La Farina presiding over the ceremony.

To get wedding ready, the bride had her hair and makeup done at the ship’s Cloud 9 spa, complimentary, of course.

Following the nuptials, the Carnival Freedom team pulled out all the stops with a reception with a buffet, a three-tiered wedding cake, an ice sculpture and a DJ who got everyone on the dance floor.

In addition to providing the shipboard wedding at no charge, Carnival even reimbursed the couple the funds for their canceled wedding in Jamaica. The couple also received a couples’ massages and dinner at Farenheit 555 Steakhouse during the voyage.

Congratulations to the happy couple and a hearty well-done to Carnival!