We sought respite from Ho Chi Minh City’s beating midday sun in leafy Tao Dan park, where Vietnamese locals – wearing sweatbands, legwarmers and no-nonsense looks on their faces – were in the middle of an intense game of foot badminton. 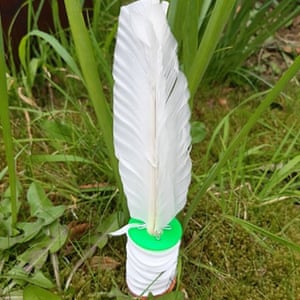 We joined the growing crowd of onlookers and marvelled at the speed with which competitors snapped their legs up and caught the shuttlecock with the tips of their feet. One player observed our interest and directed us to a basket of foot shuttlecocks on sale for $1, before animatedly teaching us the rules. On returning home, we eagerly tried to recreate the game in a London park – and failed miserably.
Roisin McCormack

Seal it with a souvenir, Japan 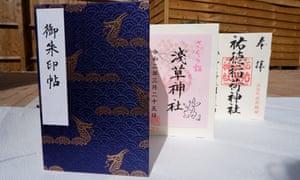 I began collecting goshuin (shrine/temple seals) to track my journey across Japan, but found they are also a great way to combat temple-fatigue (especially in Kyoto). Collected in an accordion-like goshuinchō (£10-15 from most shrines, temples and stationery stores), a goshuin (£3.50) is a red stamp, with either the name of the shrine or a Buddhist sutra hand-written in black ink. Each seal is different; some are traditional, others cute, with some being limited-edition works of art that change with the seasons.
Katie Henderson

Every week we ask our readers for recommendations from their travels. A selection of tips will be featured online and may appear in print, and the best entry each week (as chosen by Tom Hall of Lonely Planet) wins £200 towards a stay at one of 3,000-plus Sawday’s properties in the UK and Europe. To enter the latest competition visit the readers’ tips homepage

It’s all coming back to me, Brisbane 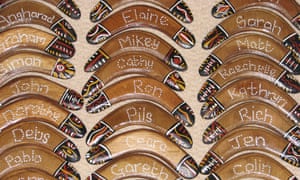 While holidaying in Brisbane, Christmas 2009, myself and my Australian fiancé were having a mooch around the South Bank when we stumbled across a stall selling boomerangs, among other souvenirs. We were due to marry in the UK in the summer of 2010 and managed to persuade the seller to hand-paint 10 large boomerangs for the table names, and 80 small ones for the individual guests. We paid about $200 for them all and then stuck a magnet on the back of each one. Ten years on, and when we visit friends they still have them on their fridges.
Caroline Roberts 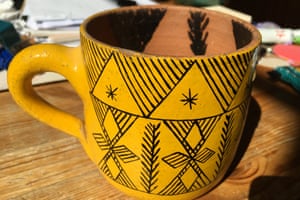 One summer, I travelled on a bus from Fez to Marrakech. It was sauna-hot. The bus stopped at a village and a boy got on, clay pitcher in one hand and yellow mug in the other. He was selling cupfuls of water for five centimes, when 13 dirhams were worth £1. I wasn’t thirsty but the mug was special. The boy and I got chatting and I gave him 13 dirhams and he gave me the mug. Not sure who was more delighted. Forty-plus years on, I still treasure it.
Jane Sebba 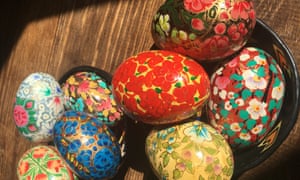 In the heat of the Indian pre-monsoon season, chocolate melts rapidly on removal from the fridge – so Easter egg hunting with my young children was a non-starter. Discovered in the markets of Srinagar, Kashmiri papier-mâché eggs came to our rescue. Hand-painted with traditional floral motifs by local craftsmen, their vibrant colours announce the season of renewal. During lockdown, these stand as a wonderful memory of freedom and joy, observing spring blossoming from a window in London.
Davide 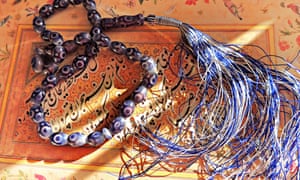 In the glorious 1970s, I travelled by train from Basel to Tehran because I wanted to practice the Farsi I had learnt at university and immerse myself in a culture I had read so much about. It was a life-changing experience. I brought home a carpet, books and little souvenirs Iranian friends gave me, among them this rosary; simple glass beads which mean the world to me. They bring back memories of a time when I still believed everything was feasible and returning to Iran always a possibility. It isn’t now. I booked last December, but riots erupted in Tehran; booked again in January and General Soleimani was killed; and now there is coronavirus. But, inshallah, one day…
Alexandra Lavizzari

Put a sock on it, Japan 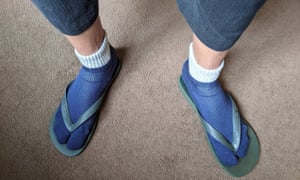 Last time I visited Japan I came back with nine pairs of socks. Nowhere in the world are socks more visible than in Japan, where leaving your shoes at the door of temples, galleries and even restaurants is commonplace. Quirky socks abound in souvenir shops, though quality and craftsmanship are best found in department stores and independent shops. Tabio, the most popular brand, can be found online but note that the pictures don’t do them justice. My favourite pair are from Nara and have an amazing grip and are perfect to wear with my split-toe sandals.
Ale 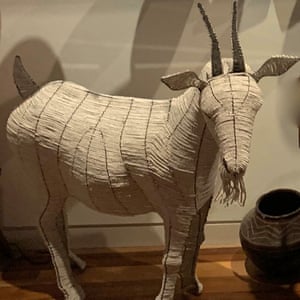 I purchased this lifesize beaded goat from a Zimbabwean street vendor in Johannesburg 10 years ago for about £100. Then, when I brought him on to the plane as hand luggage the next day, I spotted the former England cricketer Allan Lamb and his wife a few seats away. Lindsay Lamb told me she had seen the same vendor and had nearly bought Allan one of the lambs but couldn’t think how to transport it home.
Jon Blair 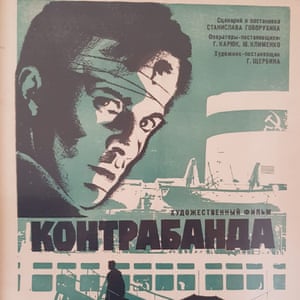 Dry Bridge Market in Tbilisi sprung up during the perestroika period as a place locals could shift their possessions to cope with the economic shocks. These days the wares vary from local wine and artisan pottery to furniture and Soviet-era memorabilia. For backpackers wanting something easy to carry but with plenty of sentimentality, the cinema posters we found were a tasteful mix of constructivist sensibilities and limited colour. After much good-tempered haggling, I bought a 1974 poster for the Stanislav Govorukhin movie, Kontrabanda, for around 25 lari (about £6). Every time I look at it I’m reminded of the passion the trader had for that era of cinema, which was obvious despite our limited shared language.
Tim Moss

Have you got a licence for that? US 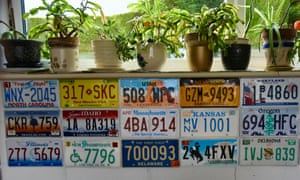 When I visit the USA, I buy old licence plates as souvenirs. I like the idea that they’re everyday objects rather than made for tourists, and they’re often inexpensive – many are available for $5. Finding them involves searching flea markets and junk shops, which is all part of the fun. Look closely and you’ll see that each one is a mini-story about the issuing state. Back at home, they decorate my garage walls.
Allan Colwill